Posted on April 1, 2018 by joannekendrick

The energy was sky high last Thursday, and despite the seemingly endless wind and rain, the Actress & Bishop was the place to be, even if you had to get there in a sailboat. MeMe Detroit is back, with a fresh new song, and she is launching it in style!

I wrote about MeMe Detroit a while back, and had a feeling I would be hearing more from her. Indeed, she has been busy, and is currently on tour around the country. Thursday kicked it off, and you could feel the atmostphere in the crowd. Selfies, jumping, audience singing… this was not a gig you were going to get away with standing still.

Released 30th March, Soc Med Junkies is a thought provoking take on our reliance on the hoards of Social Media networks out there, with a tongue in cheek video that showcases just how much we all rely on our phones. Watching it kinda makes you question… is it merely a culture or has it all evolved into a weirdly accepted dependence? Can we stop if we really want to?

Music that Moved Me:

Hey, here’s something I haven’t done before. I want to share some of the music I grew up with… some of the stuff that sort of shaped my silly self and maybe bought a tear to my eye and probably made the hairs at the back of my neck stand on end and possibly soothed my angry soul.

Music is important, we all get that. Even with so much of it around, there’s always that select list of bands and musicians that have that special place in your heart. You have your reasons, I have mine. Those artists that you hold dear bring you memories and inspiration, and in some strong cases, teach you meaning and lesson. Or you may just like the beats, I dunno. In any case, a band that first came to my attention in my mid teens held a massive impression on me. I also may have had a bit of a ladycrush on the lead singer. I also might still have one. I bring you The Distillers.

It was around the Sing Sing Death House era that they crashed into my life. Scuzz TV blaring out City of Angels, holding its own fort among a sea of testosterone… I guess it’s safe to say that my attention was caught. I wanted to know more, so off I skipped to hunt the album down and subsequently, well… over the next 10 years I almost wore it out. I remember being gutted about being too young to venture down to Birmingham to see them live, I remember being distraught that I couldn’t catch them at Download Festival, and I recall eagerly awaiting for Coral Fang to come out. I’d had my heroes, sure, but Brody was an icon of my time; fresh, in your face, with her music evolving and growing over the years in the same sense that I was. When I was young, lost, and angry, the earlier songs bought me through. When I was older, making mistakes and learning lessons, the later music made me think.

Although the band split in 2006, I finally got to see Brody years later when she was flying solo. I liked what she did with Spinnerette… a different, calmer, approach, while retaining some of the fire. They didn’t get so much attention as The Distillers, and never made quite the impact, but still, the songs were decent, if maybe a little forgettable. Her complete solo effort, Diploid Love wasn’t too bad, either. However, with the shock confirmation earlier this year that the Distillers are going to be playing together again, I gotta say there’s more than a few happy faces about!

Posted on October 28, 2016 by joannekendrick

Twas a chilly October night, and as I donned my thick coat and scarf and set out to catch the train to Brum, a great feeling of expectation filled me.  This line up was cracking, and I had been looking forward to it all day. This was not a night for serious, heavy ‘metaaaaaaal!’. No. Tonight was a treat. Steel Panther, along with Bowling for Soup and Buck Cherry were playing. As I entered the Barcleycard Arena it was dark and cold, but the mood was high as I passed the hundreds of people who were well dressed for the occasion. Many a pair of tight leather and permed wig were noticed as I queued up to the bar for a drink before entering the standing area.

Buck Cherry were up first, and I have to admit I walked in mid-performance as it took me a while to find the venue (I am not a Birmingham veteran; being a small town Walsall gal, visits aren’t frequent). I have seen Buck Cherry before and their ten minute rendition of ‘Crazy Bitch’ was a familiar experience. They seemed to give a tired air, from what I saw, but maybe it is a little unfair to be so harsh, as the next act sort of blew them out of the water. Bowling for Soup were quite fantastic, and from the moment they walked on the stage they won the audience over with jokes, puns and banter. It was obvious that the guys were comfortable around each other, and that they had been together for a long time.

Belting out past hits such as ‘High School never ends’ and ‘Punk Rock 101’, punctuated with expertly timed comical pauses and little tricks with their instruments and plecks mid-performance, I was suddenly cast back to when I was in my late teens, early 20s and I was perfectly happy to wave back when Lead singer and guitarist Jarret Reddick told us they ‘were the only band out there that waved at its fans’. Asking if they remembered ‘Staceys Mom’, and to a massive cheer reminding us that contrary to popular belief, they did not originally do that song, Bowling for Soup then proceeded to do an amazing cover. Their time on stage went in the blink of an eye and by the end of the performance, the crowd was in very good spirit. 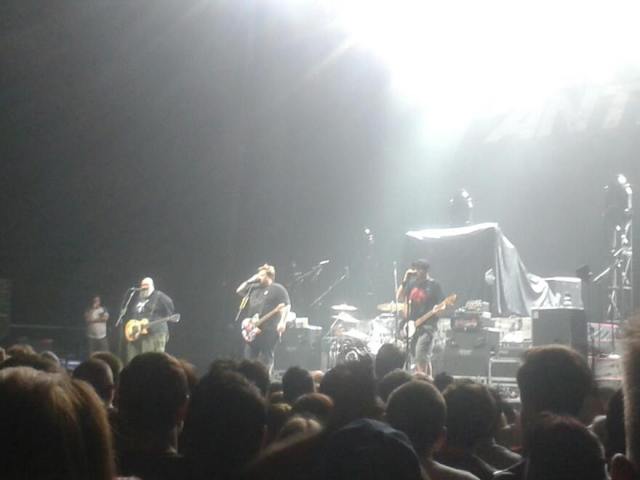 Steel Panther were another thing altogether. Entering stage in true 80s Rock Diva fashion, wind machine on full tilt and with very tight clothes and very big hair, the performance was high quality from the off, and playing songs such as ‘Party like Tomorrow is the end of the World’ with a ton of energy, I found myself in the mosh pit, giving my all (and losing my favourite scarf – I guess there could be worse ways to lose it). These guys also shared quips (and make up tips) with each other, and was even joined on stage by Jarret for a while. One of the stand out moments from the performance was when guitarist Russ took the stage for a little while, and gave us all a great solo show with the guitar and drums.

I have to say, Steel Panther wouldn’t have been the number one choice for me to go and see, though. I usually like my gigs a little more serious, and I go for the flannel shirts rather than the lycra leotards… but I did find myself enjoying myself at this gig. The atmostphere was wonderful, the mosh pit was accomodating; if you fell (which I did myself), you got picked straight back up promptly, and led away from the chaos to catch your breath.  It was a great night, and more than a few of the audience left the venue with a smile on their face. 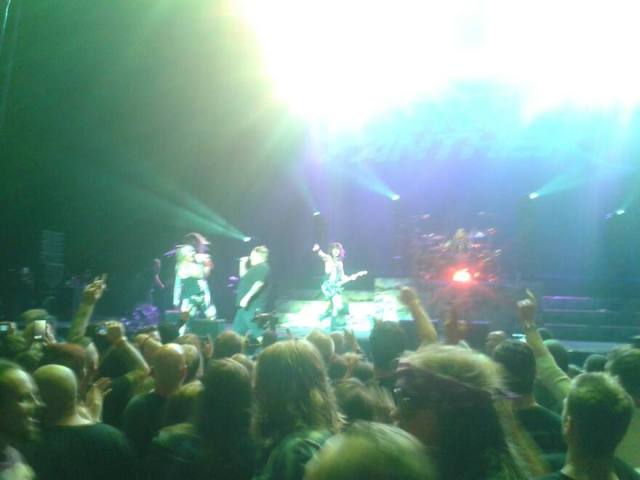 Hey hey… We have yet another week of brilliant new music here for you! Bought to you by Sound Lab host Jim Garrett, this latest round of top tunes come from bands and musicians such as Jack White, The Beat, Trampolene, The Chainsmokers and many more! This week’s interview is with As Sirens Fall… Not one to be missed – hope you enjoy the show!

Chase The Day – Forget Your Name

Of Mice And Men – Real

The Rifles – Wall Around Your Heart

Clean Cut Kid – We Used To Be In Love

Of Kings And Captains – Jack My Boy

Sarah Darling – You Take Me All The Way

Alright there, how are you all? I hope you’re ready for another dose of brilliant music! Bought to you by Sound Lab host Jim Garrett, we have tunes from Skillet, Mystery Jets, River Nelson, Lit like Vegas and much more, with this week’s interview being with Grumble Bee! Hope you enjoy the show!

Opal Blue – Feed Me To The Lions

Skillet – I Want To Live

Mystery Jets – The World Is Overtaking Me

Ethan And The Reformation – Hollandia

Posted on August 9, 2016 by joannekendrick

Hey guys and gals, hope your week has been as brilliant as the music we have lined up for you in this latest podcast! With Sound Lab host Jim Garrett bringing you tunes from Don Broco, My Chemical Romance, Korn, Blink 182, to name a few, and with this week’s interview with From Ashes to New, there are many reasons to stay tuned in… So put your feet up and get your earphones in!

My Chemical Romance – The Five Of Us Are Dying

Early Hours – Into the Wilderness

Everywhere – Some Other Dude

Posted on August 1, 2016 by joannekendrick

Hey hey, welcome to another week of great music from The Sound Lab! This week, host Jim Garrett brings you tunes from Regina Spektor, The Veronicas, The Phoenix Rose and much much more, plus this week’s interview is with none other than Avatar! So put your feet up, have a good listen and enjoy the show!

This Wild Life – Pull Me Out

The Battles Of Winter – Wrong Port

The So So Glos – Dancing Industry

The Veronicas – In My Blood

The Phoenix Rose – Is This Luv